From now on, the Italian Army’s and the Carabinieri’s best athletes will be able to train on a state-of-the-art athletics track. This track is FIDAL and WORLD ATHLETICS homologated and has been made with rubber recycled from End-of-Life Tyres. An environmentally-friendly solution, that looks to the future and to innovation.

A new athletics track made with rubber recycled from End-of-Life Tyres has been inaugurated this morning at Modena’s Military Academy. This is the only officers’ training institute permanently on duty for both the Italian Army and the Carabinieri Corps.

The surface has been made with the best available technologies and it combines top level athletics performances with a constantly growing sustainability of the Army’s sports infrastructures, thanks to the presence of the recycled rubber obtained from the recovery of End-of-Life Tyres.

The intervention has been made possible thanks to Ecopneus with the technical support of Casali Sport – a leading company in the creation of sports surfaces and athletics tracks in Italy. 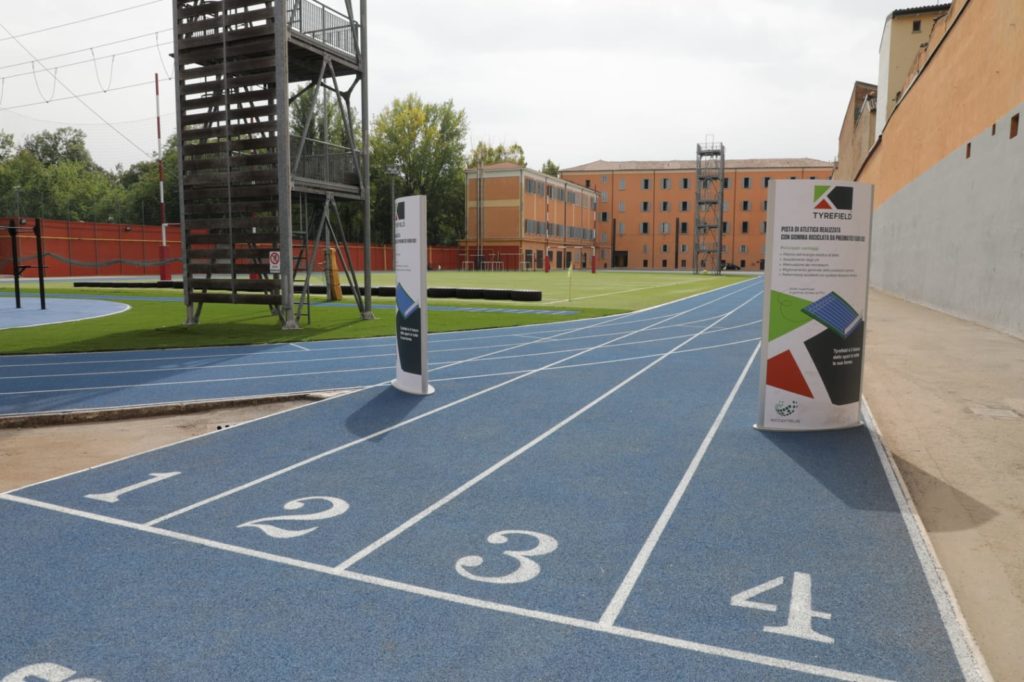 The system installed at Modena’s Military Academy is of the waterproof typology. It is composed of an elastic base layer, built on site and made of rubber granules recycled from ELTs and a polyurethane binder. The superficial layer, instead, is made of a self-levelling polyurethane resin with a finishing where the lines of the lanes are painted on. The surface made on site guarantees homogeneity thanks to the absence of joints and is designed to obtain an adequate shock absorption. This subsequently offers an optimisation of the elastic energy, guaranteeing an overall improvement of sports performances and a uniform dynamic answer. Moreover, the surface assures excellent performances in all weather conditions.

Federico Dossena, General manager di Ecopneus, commented: “We are proud of being able to put such a highly performing, state-of-the-art sports surface made with recycled rubber at the disposal of Modena’s Military Academy. The sports sector is currently absorbing the largest amounts of the recycled rubber produced by the Ecopneus chain. That is an average of about 30 to 40 thousand tonnes of recycled rubber every year. This, precisely because the addition of recycled rubber gives the surface the characteristics that make it appropriate also for practicing sports at the highest levels. It also offers all necessary protection for athletes’ performances. These solutions look to the future and to an ever greater sustainability even of sports installations”.

The special finishing of the SW-PM Sportrack system developed by Casali Sport has been homologated by FIDAL (Federazione Italiana di Atletica Leggera – Italian Athletics Federation) and World Athletics. The latter is the organisation that deals with athletics at world’s level and was previously known as the International Association of Athletics Federations (IAAF).

The versatility of the composition of the system allows to create the best surface for every need: from international sports competitions, to surfaces for daily training sessions.

Last but not least, this intervention has also provided for the extra-ordinary maintenance of the existing rugby pitch with a refill of the infill of the synthetic turf with granules of rubber recycled from ELTs, as well as the creation of the new ground-fighting surface. The latter is a light-blue, anti-shock surface made with recycled rubber granules melted on site and neutral polyurethane binder.