Safe and sustainable hi-tech: this is the new Bicocca Stadium of the city of Milan

From Piero Pirelli’s Milan AC to the state-of-the-art technologies and the use of recycled rubber. A century after its birth, the new Bicocca Stadium has been inaugurated – a completely renovated sports centre. 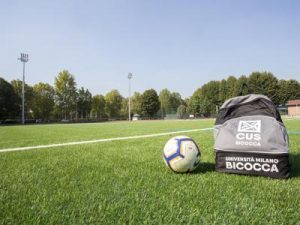 A bivalent sports surface, an athletics track with speed sensors, and completely renovated grandstand and changing rooms managed by CUS Milan (University Sports Centre). These are the requalification interventions carried out by the University within the scope of the project developed to promote university sports and the use of the facilities from the part of all residents. The plan provides for the opening also of a Centre for sports medicine and a centre for aggregation, culture, and free time.

The synthetic turf football and rugby sports surface has been made with recycled rubber from End-of-Life tyres. A solution that pays attention to the environment, is cost-effective, highly performing, and has been adopted thanks to the support of Ecopneus.

The athletics track is the first in Italy to be made with the Polytan SmarTracks solution. This is a magnetic speed detection system working by the means of sensors installed in the under layer. It allows to monitor the athletes’ performances by the means of a smartphone app. Thanks to these characteristics, it will be possible to carry out competitions and races. The new Bicocca Stadium will be at citizens’ reach thanks to the activities open to everybody, such as: jogging and long jump, the many tennis, football, and athletics courses, and the possibility of organising school competitions and of renting the sports surfaces.

A new life, thus, for the Bicocca Stadium, whose story dates back to 1900s. One hundred years ago, in October 1919, the stadium was inaugurated with the name of “Pirelli’s pitch”. Precisely during the 1919-1920 season, Milan AC played two matches of the current Serie A (the Italian most important football championship) in this stadium.

The mountaineer Carlo Alberto Cimenti has taken part to the inauguration. He has recently come back from an expedition to the summit of the Nanga Parbat, the ninth highest mountain in the world. The mountaineer from Turin is an example of passion, perseverance, and courage: indeed, his intervention in the rescue of his mate Francesco Cassardo, who fell for 500 metres off the peak of Gasherbrum VII (Pakistan) last July, was decisive.

The first, important appointment of the new season of the Bicocca Stadium is planned for Sunday 20th October. Indeed, the second edition of the CorriBicocca – the university’s running race open to everybody and without barriers – will leave from the sports centre.