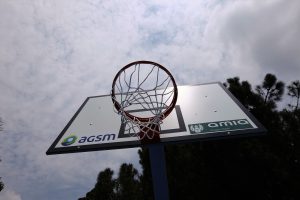 During the Streetball Week, two days of 3×3 basketball challenges with dunks, dribbles and rebounds will be waiting for all basketball lovers on the basketball court in recycled rubber located in Porta Catena, in Verona, next weekend. Not only this court is as performing as the best professional basketball courts, but it also cares about the environment, as it was made with about 5,000 kg or rubber recycled from End-of-Life Tyres. Thanks to Ecopneus, the non-profit company for the management of ELTs in Italy, the Tyrefield basketball court was made last year with some prefabricated rolls in recycled rubber that were lain to create a single surface. A special coloured acrylic finishing was applied on this layer. The line markings were then applied onto this same finishing.

This unique surface was made also thanks to the collaboration of the ex-captain of the Italian Basketball Team, Giacomo “Gek” Galanda. Giacomo is now a member of the Italian Basketball Federation; he has personally tested several courts in recycled rubber, and has then identified the optimal characteristics that were then used to make Verona’s court. The court recreates a feeling of the return of energy upon jumping which is very similar to the one of parquet. This guarantees also shock absorption without being too “elastic”. Indeed, this aspect would affect the athlete’s fatigue, and, hence, its performance.

The 3×3 basketball challenges of Verona’s Streetball Week came less than a month after the victory of the Italian National Women’s 3×3 basketball team at the world championships in Manila, and now they are dreaming of an Olympic gold at Tokyo 2020. This discipline was born at the end in the streets of the USA at the end of the 1980s. It has been under observation for years from the part of FIBA (the International Basketball Federation) and it will debut during the next Olympic games in Japan.

Thus, the Porta Catena court represents a state-of-the-art court for the whole Italian basketball world. It is a model to follow for all administrations, associations, federations and sports promotion bodies that intend spreading the practice of 3×3 basketball.

The results obtained by our main national teams at the waiting for Tokyo 2020 will increase the interest and the attention towards this discipline. With Tyrefield for basketball, it will be possible to practice this fast-growing sport at top levels, in a safe way, contributing to the environmental sustainability of our Country.