The car of the recycled rubber of TrenoVerde is in Naples

From 26th to 28th February, we are waiting for you to find out about the many lives of recycled rubber on the TrenoVerde at platform 3 of the Central Station of the city of Naples!

Ecopneus collected over 18,500 tonnes of ELTs (End-of-Life Tyres) in the Campania Region in 2018. This is equivalent to the weight of over 2 million automobile tyres. If we were to put them in a row, we could create a line that is about 1,030 km long: the distance between Naples and Zurich.

Ecopneus has been the protagonist of the Protocol for the extra-ordinary collection of ELTs abandoned in the Terra dei Fuochi (Land of Fires): over 22,000 tonnes have been removed in over 40 towns since 2013. A new synthetic turf football pitch was made in Scampia in 2017. 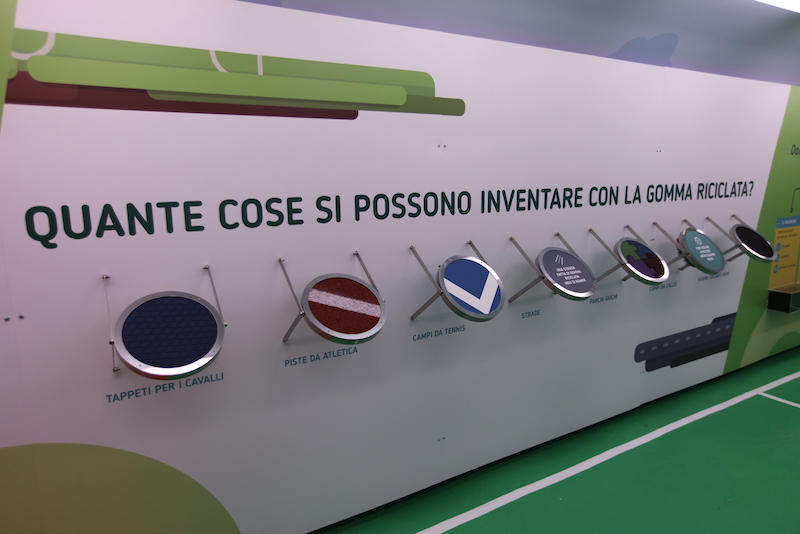 How can End-of-Life tyres fight climate change, limit the use of fossil resources and of energy, and contribute to make our cities more sustainable and “smarter”?

From tomorrow until 28th February, at the FS Railway station of Naples, adults and children will find an answer to this question visiting the car set up by Ecopneus on the TrenoVerde (GreenTrain). This is the historical itinerating campaign of Legambiente and Ferrovie dello Stato (the Italian National Railways). Ecopneus is a main partner of the event. This year the campaign is dedicated to a great global challenge: leave the era of fossil resources and stop climate change.

The third car of the train is fully dedicated to the chain of End-of-Life Tyre (ELT) recovery and recycling of Ecopneus. The rubber a tyre is made of is, indeed, a material of great quality used to make “silent”, safe and long-lasting asphalts, football pitches, multi-purpose sports surfaces, soundproofing panels, urban furniture objects, energy, and much more.

Inside the car, the visitors will find a comfortable floor made with over 1,000 kg of recycled rubber, which has been shaped and coloured to reproduce some of its main applications, such as: tennis courts, cycle lanes, or athletics tracks. Illustrations, games, and installations will lead children and adults along an educative path to personally understand the importance of a correct recycling of ELTs and the multiple applications of recycled rubber.

Giovanni Corbetta, General Manager of Ecopneus stated: “Taking part to the TrenoVerde journey – for Ecopneus, it is its third year in a row – is an excellent occasion to show the value and the importance of ELT recycling to the many students and citizens involved, by the means of many fields of applications of this amazing material: from anti-shock mats for playgrounds for the youngest children, to roads; from football and volleyball courts of the school gyms, to bollards; from benches and flower boxes, to insulation materials for the building sector. We dedicate great attention to education, because the culture of environmental protection must be a central value, especially for the younger generations, who are tomorrow’s adult citizens”.

Ecopneus has been protagonist of the Protocol for the extra-ordinary collection of the End-of-Life Tyres abandoned in the Terra dei Fuochi”since 2013. This protocol has allowed to remove over 22,000 tonnes of ELTs from the streets of over 40 towns of the territory. The Protocol was signed together with the Ministry of the Environment, the expert nominated by the Ministry of Home Affairs to fight waste fires in Campania, and the Prefectures and Councils of the cities of Naples and Caserta. Activities of awareness-raising and information about recycling and legality for both students and citizens have been developed alongside the Protocol.

By way of example, thanks to this Protocol, a new state-of-the-art recycled rubber synthetic turf football pitch was made at Scampia’s“Antonio Landieri” stadium in 2017.