In Tyrefield synthetic turf sports surfaces, granules from ELTs are used as infill material among the grass blades and to make the layer underneath the playing surface. In this second case, in the shape of a special ribbed mat, it favours the levelling of the foundations. Moreover, it gives elasticity to the surface, thus simplifying the return of energy to the athlete. At the same time, it drains rainwater.

The infill with ELT rubber granules, instead, has a performance function necessary for shock absorption and for preventing the vertical deformation of the surface. It also keeps high quality standards for the rolling and bouncing of the ball. At the same time, the infill has the function of keeping the grass blade straight and to help it to go back to its original position once trod on.

The “Serie A” Tyrefield football pitches: less injuries and a 50% cost saving 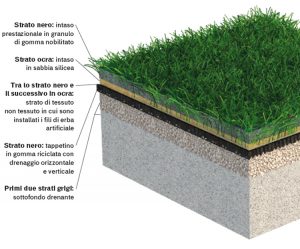 orts centre in Zingonia-Cesarano (Bergamo) already in 2014. It is a state-of-the-art synthetic turf football pitch made with recycled rubber and is used for the training sessions and the matches of their youth sector. In June 2017, also  Bologna FC1909 chose a Tyrefield football pitch with recycled rubber and organic material infill for their sports centre in Casteldebole (Bologna). This pitch is used for athletes’ rehabilitation thanks to the special characteristics of its surface.

Precisely from the point of view of the impact on athletes’ health, the then fitness coach of Atalanta BC’s main team, Francesco Vaccariello, stated that: “the data gathered from the research carried out at the Atalanta Training Center confirm that there are no differences between synthetic and natural turf pitches for what concerns injuries and their typologies”. These results were confirmed also by the study carried out by professor Mauro Testa’s team.  Professor Testa is an international expert of biomechanics and collaborated with the company Captiks to analyse the footballers’ sports activities on two different surfaces: a natural turf pitch, and the new Bologna FC1909’s Tyrefield football pitch made with recycled rubber. The many data gathered thanks to a highly technological methodology allowed to demonstrate that the Tyrefield synthetic turf sports surfaces with rubber infill are as performing as a professional natural turf football pitch, further improving athletes’ performances as well as offering financial advantages. Indeed, synthetic turf surfaces have an extremely low ordinary and extra ordinary maintenance costs. Atalanta BC’s Director of Operations, Roberto Spagnolo, declared: “today we can safely say that, if we compare a natural turf pitch with a synthetic turf one, the average maintenance costs of a Tyrefield synthetic turf football pitch are about 50% lower than a natural turf one”.

Thanks to the partnership with Ecopneus, in 2019, also Udinese Calcio chose the innovative Tyrefield synthetic turf football pitch for the requalification of the pitch side of Udine’s Stadium – the Dacia Arena – and for the pitch of their “Dino Brunelleschi” Sports Centre, where Udinese’s players train and play.

Watch the engaging video on the new Tyrefield pitch of Bologna Fc1909 with its players and members of staff:

One of the main topics of discussion within the Italian and International Football Game Movement is the one related to the use of the new synthetic and hybrid playing surfaces, compared to the traditional natural turf surfaces. The new playing surfaces tend to be more and more used because, differently from natural turf surfaces, they do not suffer from the normal sports activities (holes and turfs) and they do not get damaged by bad weather conditions (rain, frost, drought). Moreover, they guarantee lower maintenance costs.

Professor Testa is a leading expert in biomechanics at international level. The objective of the study carried out by his team on Bologna FC1909’s football pitch in collaboration with the company Captiks was to analyse the youth team’s sports activities on two different sports surfaces: a natural turf pitch and a synthetic turf surface.

The footballers were tested by the means of inertial sensors and EMG during certain exercises and positional play agreed with Bologna FC’s technical staff.

The infill in recyled rubber for Tyrefield pitches

The use of recycled rubber as infill material for artificial turf football pitches has spread internationally starting from the end of the 1990s. Since its beginning, such technology has demonstrated it can guarantee excellent athletic performances and an intensive use of sports centres (both in cold and hot climates). Moreover, its overall management costs are lower than the one for natural turf. Already in 2001 FIFA expressed itself in favour of the use of this typology of pitches with the publication of the “FIFA Quality Concept”. Few years later, this example was followed by UEFA, with the approval –in 2005 – of the use of such pitches for the matches of its championship. The result is that about 500,000 tonnes of granules are used in Europe, North America, and the Gulf every year. It represents the main application of recycled granules.

The higher performances of rubber from ELTs have been acknowledged also by the market. After experimenting alternative solutions, it has gone back to using rubber infill. This request has prompted the Italian recyclers of ELTs to improve the quality of the produced materials and offer “enhanced” granules. Indeed, the rubber granules obtained from the shredding process are coated with a special pigmented additive, which allows to create a very resistant film on their surface. However, it is not only an aesthetic factor: the brighter colours of the infill reflect sun rays and contribute to reduce the heating of the pitch during the hottest hours of the day, thus improving the athletes’ comfort.