Figures, scenarios and proposals for a virtuous system – the one of ELT collection and recycling in Italy – which is a leader in Europe but is also threatened by the “illegality bug” caused by off-the-records tyre sales.

The results of the whistleblowing platform, “CambioPulito”: 361 recorded reports of offence, 301 sued companies, 136 sued operators, 8 reports to the Law-enforcement Forces.

Campania, Lombardy, and Apulia are the main regions for number of reports; however, many cases of on-line trade without VAT and eco-fees payment have also been reported. 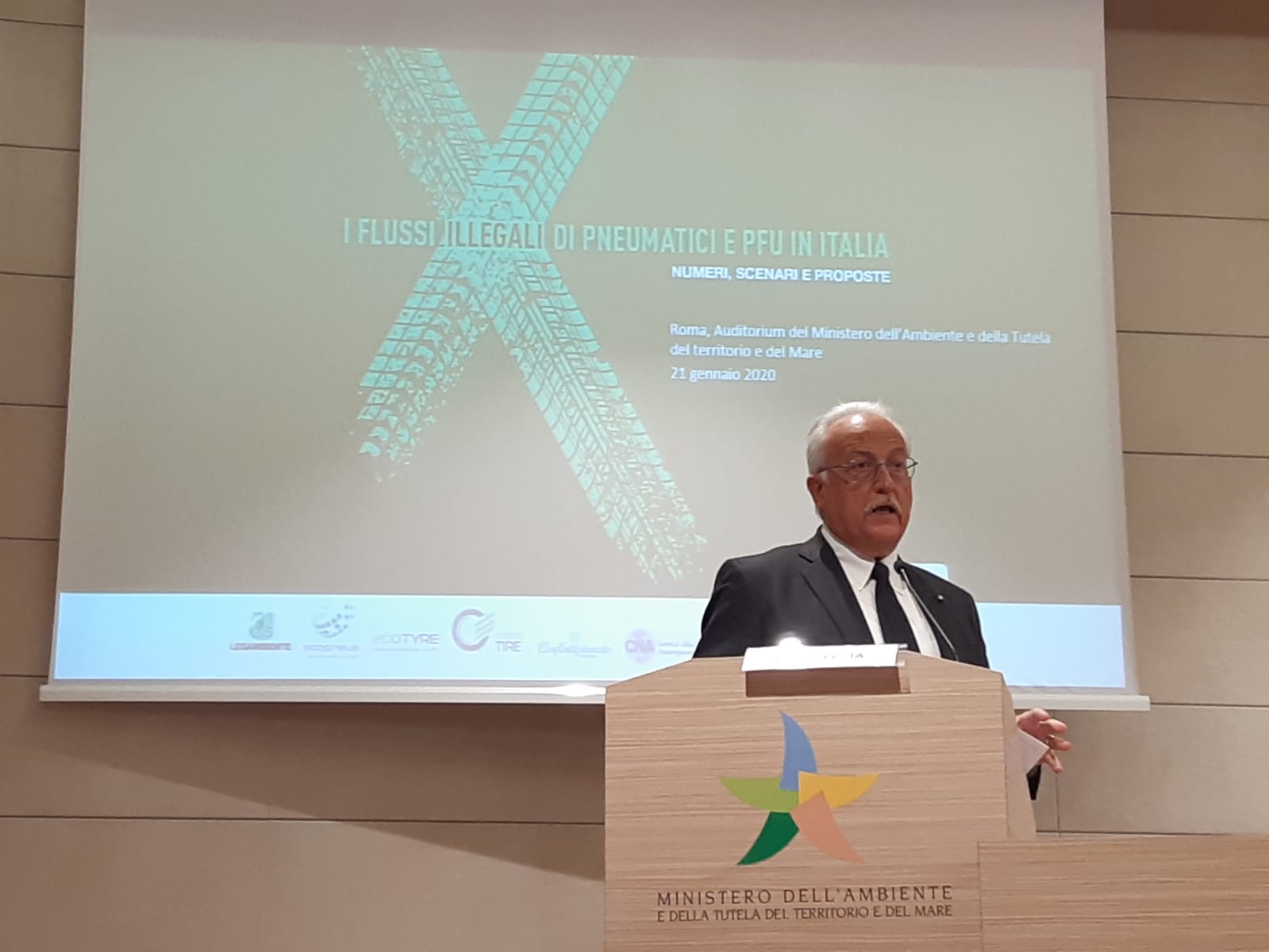 Knowing is the first step to fight the illegality that is still penalising the honest operators of this sector. This is the concept at the base of the Report “The illegal flows of tyres and ELTs in Italy”, presented today in Rome in the presence of the Minister of the Environment, General Sergio Costa. Minister Costa hosted and participated in the presentation of the final document that illustrates the activities carried out by the Observatory and by the platform CambioPulito to contrast illegal practices of the sector of tyres and ELTs. The project is promoted by Legambiente in collaboration with the consortia that deal with the management of End-of-Life Tyres (ELTs) Ecopneus, EcoTyre, and Greentire – that jointly manage about 85% of the national amount – and the trade associations Confartigianato, CNA, Airp, Federpneus, and Assogomma.

A project that lasted for over two and a half years and has allowed to define a clear picture of the critical areas that expose the system of collection and recovery of ELTs to illegality and irregularities. This is even worse because this sector represents a case of excellence in waste management in Italy’s journey towards the circular economy. Moreover, it assures the collection of over 380,000 tonnes of ELTs at tyre dealers, mechanics, and service stations all over the national territory every year.

Indeed, it is estimated that about 30 to 40 thousand tonnes of tyres are illegally placed on the national market every year. To these, one must add the non-payment of Eco Fees (that are necessary for tyre collection and recycling) equal to about 12 million Euros, and VAT evasion that is estimated at about 80 million Euros. In addition to this, there is a high risk of dumping of End-of-Life tyres deriving from illegal activities in the environment. Indeed, these tyres do not exist and, so, they are external to the rules of the national management of ELTs.

Despite the fact that the Ministry of Environment imposed an +5% increase of management target on the consortia that deal with ELT collection and recovery in January 2019, the illegal flows continue to strongly influence the functioning of the system and to penalise the honest operators’ activities. Indeed, the generated illegal ELTs end up in the overall amount of ELTs to collect, and this makes it impossible to comply with the yearly fixed targets. Moreover, illegal ELTs generate two negative impacts: the accumulation of ELTs in the operators’ yards, and the risk of illegal dumping in the environment.

Thanks also to its whistleblowing platform, CambioPulito (www.cambiopulito.it), dedicated to the operators of the sectors and managed by Legambiente, from June 2017 to 15th December 2019 the work of the Observatory allowed to paint a clear picture of the situation: 361 reports of crime committed, which involved 301 companies.

The collected reports have been processed by Legambiente’s lawyers – the Juridical Action Centres (Centri di Azione Giuridica – Ceag). These reports turned out to be precise and detailed in almost all cases, and were accompanied by precise supporting documentation. This led to their elaboration into 8 reports sent to the Carabinieri specialised in Environmental Protection, with the indication of 136 companies (126 Italian and 10 foreign ones). 35% of the operators controlled were subsequently sanctioned. 14 internet websites (5 Italian and 9 foreign ones) were signalled to the Competition and Market Authority. 24 cases in Campania were signalled to the Aeronaval Operative Department of the Finance Police of Naples.

All the reports have concentrated on supposed online illegal trade (often overseas – and this makes the contrast and repression activities even harder and complex to carry out) and illegal disposal, omitted VAT and Eco Fees payment, illegal practice of business activities, and unfair competition. About 80% of reports concerned supposed violations of trade rules, free competition, and labour market. Thanks to these reports, it was possible to focus also on the dynamics of the upsurge of thefts of new tyres to place on the illegal market (above all, online).

In the part of the chain that manages ELTs, illegality is: sales of ELTs as second-hand tyres, thefts of ELTs for activities of illegal recycling, and frauds on the weighing systems of ELTs. With reference to the geographical distribution, among the most affected regions there are: Campania, that has collected by far the largest number of reports (77), followed by Lombardy (51), Apulia (25), Abruzzo (22), Emilia Romagna (21), Sicily (18), Calabria (17), Liguria (15) and Lazio (14).

Enrico Fontana, coordinator of the Observatory, stated: “Thanks to the Decree of the Ministry of the Environment that introduced the new system for the collection and management of ELTs and that is based on Eco-fees and the producers’ responsibility, since 2011 Italy has definitively left behind a situation made of systematic dumping of ELTs that caused great environmental risks. These risks have been witnessed by the so-called “historical stocks” of this typology of waste, which have been emptied. Not only: our Country can now rely on an excellence system in Europe also for this chain of the circular economy. As such, Italy cannot afford that this system that creates financial benefits, jobs in the chains of the circular economy, and important environmental benefits, is compromised by those who act illegally. For this reason, it is important that many different entities that go from Legambiente to the main ELT-management consortia, have decided to share a concrete effort to protect the vast majority of honest operators, who are the first to suffer the consequences on the market of those who make profits illegally”.

Thus, it is necessary to act concretely in order to make sure that all ELTs are brought back to legality and to the national system of ELT management, thus guaranteeing the recovery of all ELTs and, above all, protecting the operators that work correctly. Hence, the proposals that the chain has presented to Minister Costa today, aimed precisely at a more valid action of contrast of the illegal phenomena, acting on some main issues: transparency of ELT collection and recycling system; traceability of the flows of ELT generation; strengthening of the control system; promotion of the recovery chains of material recovered from the rubber recycled from ELTs.

Among the recommended actions: the creation of a Register of Tyre producers and importers and the update (at least on a six-month basis) of the Tyre Informative Bank (Banca Informativa Pneumatici – BIP), that already exists at the Ministry of the Environment; creation of an Office for the control of the subjects authorised to collect ELTs (consortia and single companies) at the Ministry of the Environment; the creation of a task force between the Security Forces and the Customs to fight the phenomenon of the off-the-books sale of tyres as well as ELT trafficking and illegal dumping; creation of a Consultation permanent table at the Ministry with collective systems of ELT management and the associations that represent the companies of the chain. 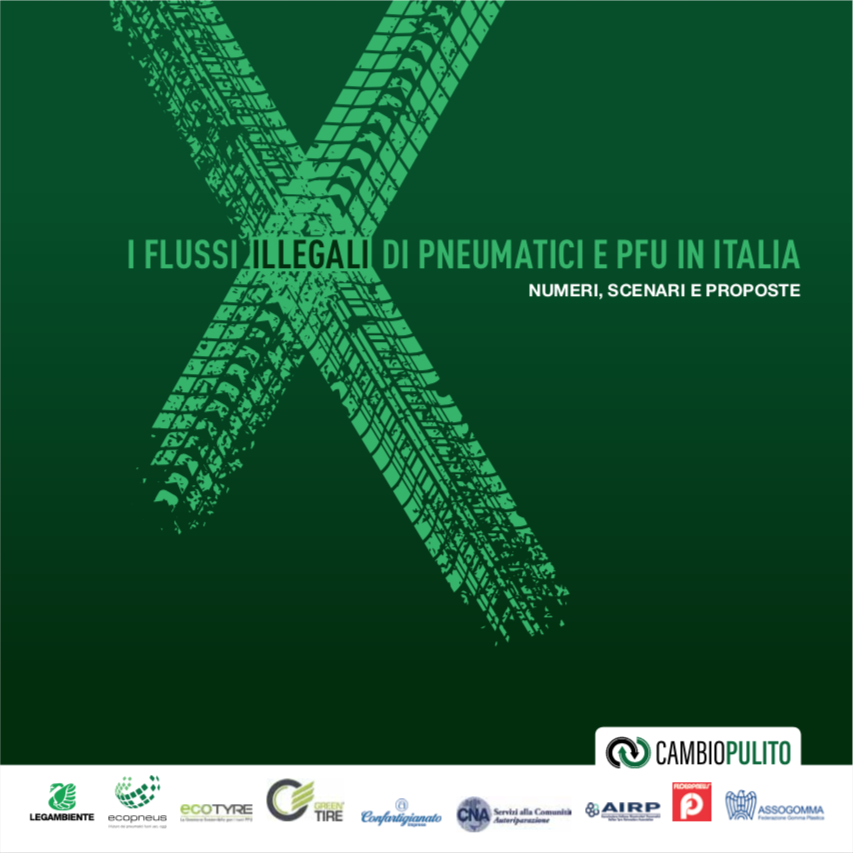