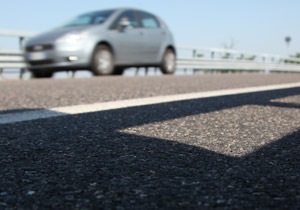 Parallel to the construction of new roads and the maintenance of existing ones, activities that absorb substantial economic resources, the study and development of technical solutions aimed at improving road performance with regard to reliability, safety and comfort have received just as much attention in recent years.

In this context, one of the areas of research with a strong potential for development is the use of rubber deriving from the recovery of end-of-life tyres (ELT) as an additive in bituminous conglomerates to create high-performance “modified asphalts”.  Ecopneus has played an active part in various experiments throughout the country, in Caserta, Bologna, the Province of Turin, Bolzano, and Trento, just to mention the main ones.  Scrolling down the page you will find details on two projects that addressed specific topics, while you can find additional detailed information on the individual projects on the press release page in the Press & News section.

The advantages of modified asphalts

Roads built with “modified asphalts” with rubber powder have many advantages:

Noise abatement itinerary: the project of the Autonomous Province of Bolzano

The reduction of noise in Val Venosta has been the focus of a technical article in the periodical “Le Strade” [“Roads”], a PDF of which is available for download.

A project was launched in the Autonomous Province of Bolzano in 2011 to test the sound-absorbing capacities of asphalt modified with rubber powder.  The noise caused by the transit of vehicles is a problem that can be resolved with different solutions: acting on the source of the noise, therefore directly on the road, or with noise barriers, or with soundproofing interventions on the villages.

The particular geomorphological characteristics of the Province of Bolzano area reduce the number of possible choices: the installation of barriers on mountain roads is complex and soundproofing actions on villages are not always welcome and in any case are burdensome for the public administration.

With this backdrop, during a maintenance operation on a section of road in the Autonomous Province of Bolzano between the towns of Coldrano and Vezzano in Val Venosta, the objective of which was to reduce traffic noise for the benefit of the houses near the roadway, the choice of the solution to be adopted fell on the use of asphalt rubber pavement, i.e. pavement to which rubber derived from end-of-life tyres had been added.

These pavements allow a reduction of transit noise on the order of 2-5 dB, which is often sufficient to provide the service expected by the citizen.  It is important to note that a reduction of 3 dB, being a value expressed on a logarithmic scale, corresponds to a halving of the perceived noise.

The measurements conducted one year after the asphalt was laid down demonstrated the effective reduction of the transit noise; the cost analysis carried out ex post by the Roads Department of the Autonomous Province of Bolzano also confirmed the competitiveness of the chosen solution as compared to the hypothetical installation of noise barriers.

The trial in the Province of Turin 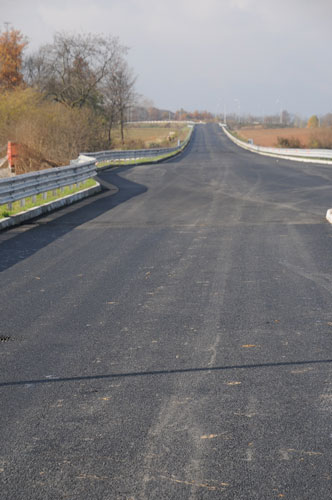 The aims and methodologies of the framework agreement signed with the Polytechnic University of Turin, called Polipneus, was addressed in an article published by the periodical “Strade e Autostrade” [“Roads and Highways”].

A tract of 1,200 metres was paved in November 2010 in the Province of Turin with bituminous conglomerate containing rubber powder deriving from end-of-life tyres: Ecopneus was one of the promoters of the trial performed as part of the work for the realization of the Venaria-Borgaro ring road. A surface of approximately 16,000 square meters was, in fact, covered with modified asphalt, the mixture for which contained powder coming from the recovery of 21,000 kg of ELTs.

The Department of Engineering of the Environment, Land and Infrastructures of the Polytechnic University of Turin launched multi-year monitoring activities on this stretch of road that regard the structural and functional characteristics provided by the addition of rubber powder, with particular attention to acoustic performances.

The tests conducted by the Polytechnic University have demonstrated:

The analysis of the costs throughout the entire life cycle of the product – considering not only the construction stages, but also maintenance work over the medium- and long-term – demonstrate how the choice to use this asphalt is also favourable from an economic standpoint.