Thanks to the use of warm technologies and eco-friendly materials such as recycled rubber powders, it is possible to create low-noise road surfaces with excellent mechanical characteristics. Moreover, the environmental impact during the production and laying phases of the mixes has been reduced.

N° 140 of the magazine Strade & Autostrade (Ways and Motorways) has faced the problem of the use of asphalts modified with powder from ELT-derived recycled rubber during a test that has seen the involvement of ANAS.

Here-below the full article, downloadable in pdf format by clicking on the link: Strade&Autostrade-asphalts ,modified with recycled rubber. Enjoy the reading.

At the beginning of July 2019, the resurfacing works of a stretch of the SS 73 “Senese-Aretina” road near Sansepolcro (AR) were completed. This is part of an experimental noise requalification plan coordinated by ANAS. In addition to the noise mitigation activities and the deep renovation of the most damaged layers of the road surface, the experimental nature of the project consisted in the creation of different types of wear surfaces with low noise emissions and high environmental sustainability. (Image 1). 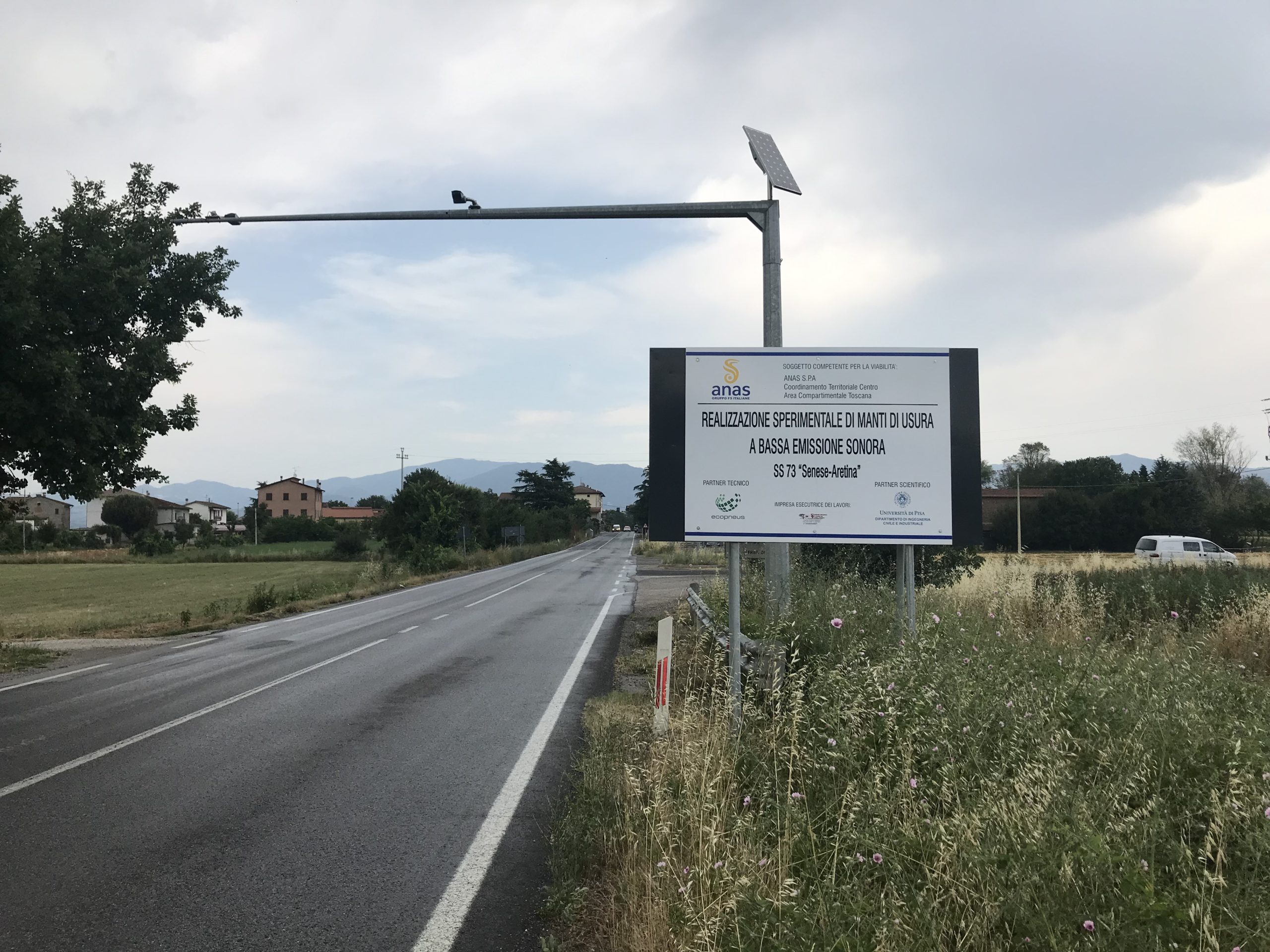 The environmental sustainability of this project is to be traced back to the use of eco-compatible technologies and materials. Indeed, the mixes for these surfaces have been produced and laid at lower temperatures than traditional hot conglomerates. So-called “warm” technologies have been used for this project. In addition to new aggregates and bitumen, these mixes contain also rubber powders deriving from End-of-Life Tyres. (ELTs).

The study of the mixes has been made by the Department of Civil and Industrial Engineering of the University of Pisa. Thanks to the know-how it has acquired with the experimentations carried out during the LEOPOLDO and NEREIDE projects, the Department has developed the so-called “low-noise surfaces”. The LEOPOLDO project was sponsored by Region Tuscany in 2008, whilst the NEREIDE one is still ongoing and is financed by the European Union’s LIFE programme. The aim is to contribute to the resolution of the environmental problems linked to the disturbance phenomena caused by vehicle noise that are strictly dependent on surface characteristics.

Ecopneus has contributed to this experimentation. In collaboration with the companies Asphalt Rubber Italia and Valli Zabban, Ecopneus has offered technical assistance for the identification and supply of the specific materials. In addition to this, the company Lucos has physically executed the works on behalf of ANAS.

The project has seen the creation of 4 contiguous experimental stretches of road – one per mix. Each of them is 400 metres long. Here-below the volumetric and mechanical characteristics are described, as well as the acoustic and functional performances (adherence and macro texture) of the laid mixes.

They are graded mixes. The first one is a traditional mix – hot (US_0) – and it has been used as point of reference. Another mix has a hot-produced optimised texture (US_1). Other two mixes use the warm technology and are added with powder from ELT-derived rubber using both with the DRY and the WET process (US_2 and US_3). The mixes are: 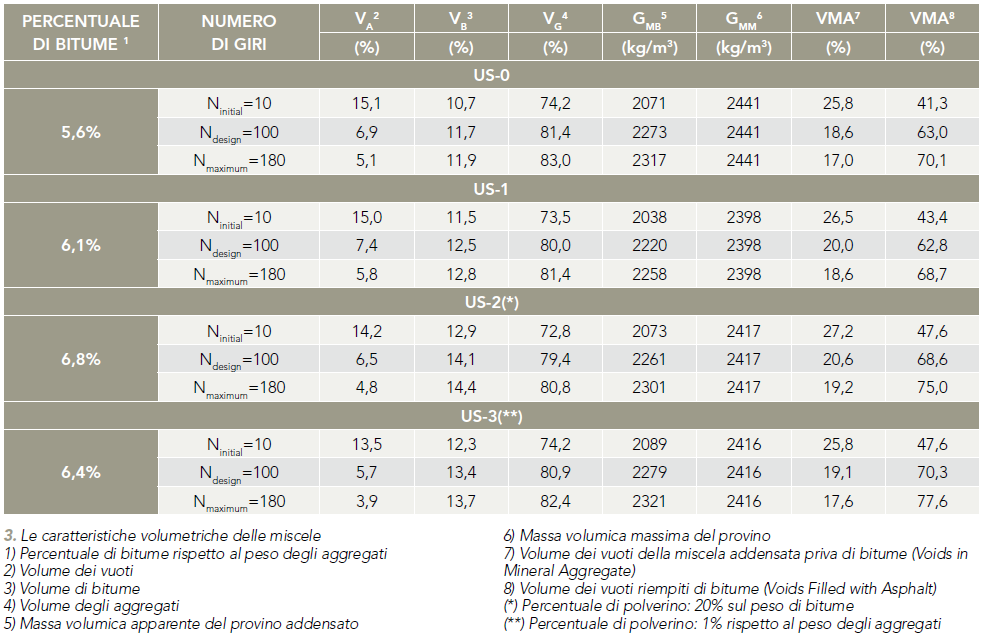 The mixes have been mechanically characterised by the means of the determination of their resistance to indirect traction (UNI EN 12697-23) and sensitivity to water (UNI EN 12697-12).

The tests have been made on samples thickened with a rotating press at a number of spins equal to Ndesign. The thickening has been made at the same time of the laying activities using a mobile laboratory. The aim was to avoid the ageing of the mixes after several heating phases.

The indirect tensile strength and sensitivity to water have been set at a temperature of 25 °C. In Table 2, their results are reported expressed in terms of indirect tensile strength (ITS), deformability ratio (ITC) and sensitivity to water by the means of the ITSR coefficient, calculated as the ratio between the indirect traction resistance of samples conditioned in water (ITSwet) and the one of non-conditioned samples (ITSdry). The results confirm the compliance with the limits of reference provided for by the Councils’ CSA (Administrative Service Centres) for the category of road subject to renovation.

THE EXPERIMENTAL STRETCHES OF ROAD

The experimental surfaces have been laid one after the other on a stretch of road of the S.S. 73 at “San Leo”. They are overall 1,600 m long and 4 cm thick. A post-operam control of the acoustic and functional indicators has been carried out on both lanes of each stretch of road. A monitoring campaign of such indicators has been planned in time, in order to establish their evolution as an effect of the traffic driving on them.

Survey of the superficial characteristics

The adherence measurements have been made with a Skiddometer BV11. They have been expressed with reference to BPNeq, CATeq (according to CNR B.U. n° 147/92) and F60 (according to IFI’s model).

Tables 3 and 4 show the macro-texture and adherence indicators for each driving direction and their relative median values.

For all mixes, the macro-texture and adherence values comply with the limits of reference provided for by the common CSA. In particular, higher macro-texture values have been recorded for the 3 experimental surfaces compared with the one of reference, with US_3 showing the highest values. 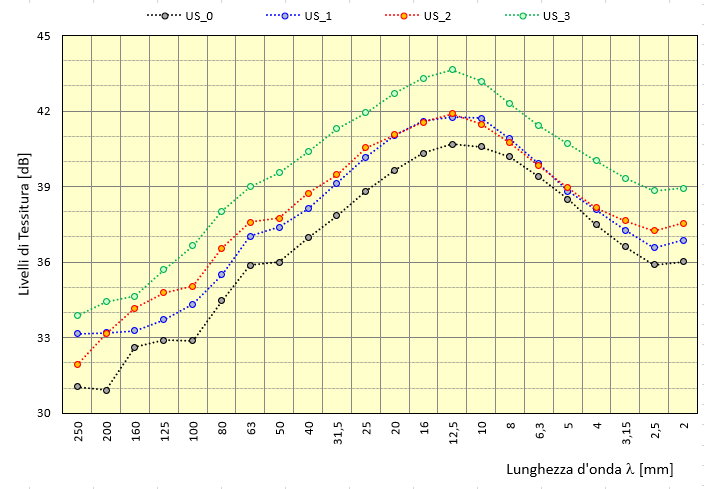 A noticeable increase in the values measured in the experimental mixes compared with the one of reference was recorded even with reference to adherence levels. This can be ascribed to the nature of the aggregates used and the presence of powders from ELTs.

From the analysis of the records, it has been possible to determine the texture spectrum in one-third-octave bands, in the range of the wavelengths comprised between 2 and 250 mm (Image 3). For all mixes, the maximum texture level is to be found at the 12.5-mm wavelength, which is near the maximum diameter of the grading curve. Instead, the values of the texture level are different. They confirm what noticed with reference to MPD and ETD: the experimental mixes have greater texture level than the one of reference. Moreover, the US_3 mix has the highest values at different wavelengths. 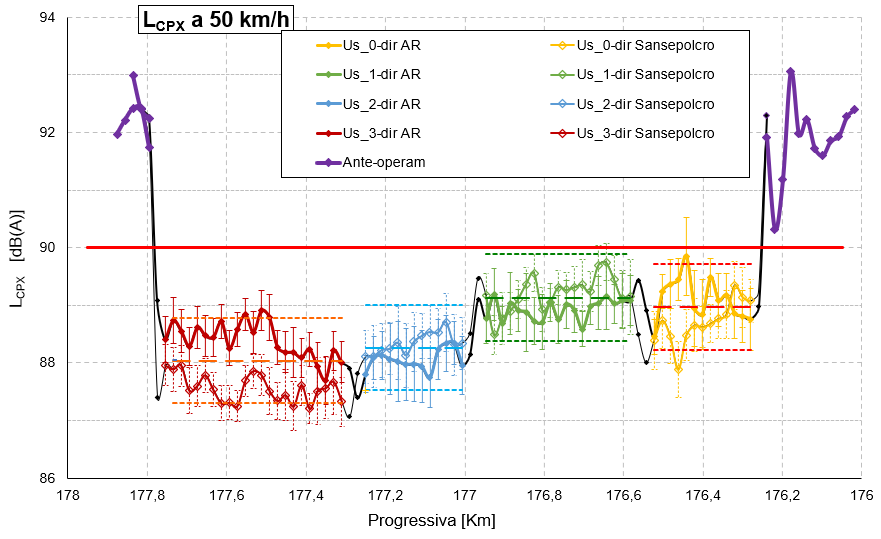 The surfaces have been acoustically tested by the IPOOL laboratory with the Close Proximity CPX [[i]], method, as provided for by the Report “Revision of Green Public Procurement Criteria for Road Design, Construction and Maintenance” [[ii]] (here after: GPP, published by the European Commission). The CPX method evaluated the acoustic emissions caused by the interaction tyre/surface, recording the acoustic pressure signal using two microphones installed near a tyre of reference [[iii]]. After recording the measurements at different speeds and correcting the data for air temperature and tyre hardness, a best-fitting process estimated the LCPX level at the speed of reference of 50 km/h on each section. The result of the measurement is constituted by the mean spatial LCPX value with related uncertainty. This result was, then, compared with the higher limits set by the GPP for the verification of production conformity [[iv]] or the durability of the acoustic performances based on the age [[v]]. The spatial performances of the CPX levels are shown in Image 4; whilst the comparison of the results with GPP limits is expressed in Table 5.

The results show how the four surfaces comply with the limit for the production conformity verification and also how the two surfaces containing ELTs offer a greater acoustic benefit compared with the other two. It is possible to appreciate the important acoustic benefits offered by the new road surfaces made with low-noise materials from the comparison with ante-operam stretches of road adjacent to the experimental ones.

The USL Agency of the South-East of Tuscany has carried out some environmental and biological measurements during the laying of the experimental mixes. These measurements were aimed at determining the levels of inhalation and skin exposure of the workers in charge of resurfacing the road. 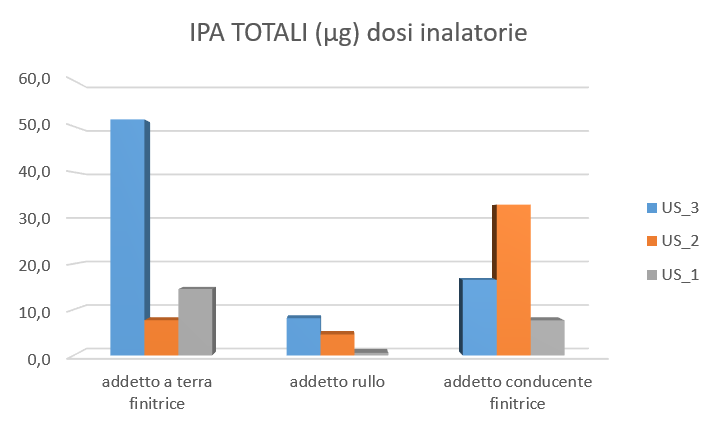 Personal sampling has been carried out on the operators present on the working site (roller operator, driver and vibratory finishing machine operator), in a fixed station, on the equipment in use, and near the stretch of road. The investigation has highlighted overall exposition levels comparable with the data obtained in previous analyses carried out during the laying of traditional conglomerates. 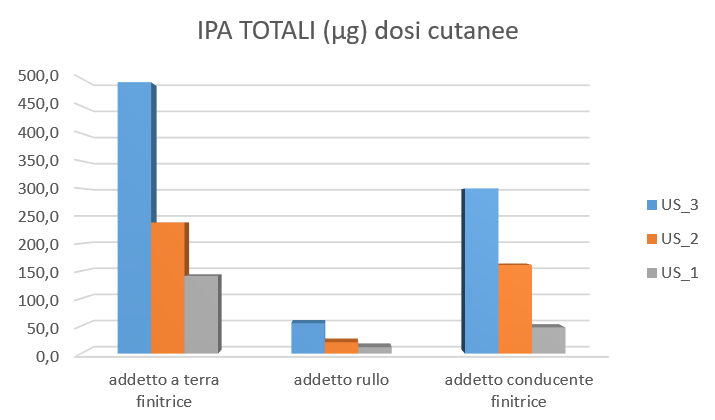 The exposition to metals was found to be negligible. For what concerns inhalable powders and volatile organic compounds, the values recorded were well below the limit values for professional exposure. With reference to carcinogenic PAHs, overall low inhaling exposure levels have been recorded (concentration of benzo(a)pyrene in personal samples inferior or equal to 1 ng/m3 in the majority of cases). On the contrary, higher levels of carcinogenic PAHs have been observed in the samples for skin exposure testing, especially for the operators of the paver and the workers on foot, compared with roller operators. Images 5 and 6 show, respectively, the inhaling and skin doses determined for total PAHs (19 determined compounds) in the various roles monitored in three different days of work.

In the light of the results of the experimentation, and in consideration of the growing needs of environmental sustainability, the use of eco-compatible technologies and materials for the creation of low-noise road surfaces represent the technical solution that better satisfies the objectives of reducing the environmental impact and the release of gases into the atmosphere. It allows to lower the temperatures necessary for the preparation and the laying of the bituminous conglomerates, even by using the same equipment. It also assures performances that are almost identical to the ones of the traditional “hot” mixes. On the other hand, the reduction of temperatures and of the emissions of fumes during the laying activities, especially in urban contexts, require a constantly growing use of “warm” technologies as a valid alternative to the traditional “hot” ones, that have a greater impact on the environment.

The following have contributed to the realisation of this research: