Identifying “who” and not just “what” there is behind a product or a service means giving an ethical and social value to the product itself by involving the consumers in an additional step of awareness of consumption.

It is with this philosophy that the Italian Ministry of Environment promotes Social Footprint, a voluntary certification system for companies and institutions that wish to communicate the social and ethical identity of their products and services to the market in a transparent way.

It is with this philosophy that Ecopneus, one of the first companies in Europe to do so, has promoted the Social Footprint certification for the consortium’s companies, further contributing to the qualification of the value of ELT in the national green economy and on the market through the social identity of the companies of the supply chain that recover and recycle them: a further strategic element for the sustainability of the system.

The survey performed for Ecopneus regards the Italian companies active in the system (excluding long-distance transport) for a total of 89 companies, of which 40 are direct suppliers for the processing and collection services.  The remaining part instead regards the subcontractors supporting the collection service.  The data were obtained through questionnaires and direct contacts with the companies involved. 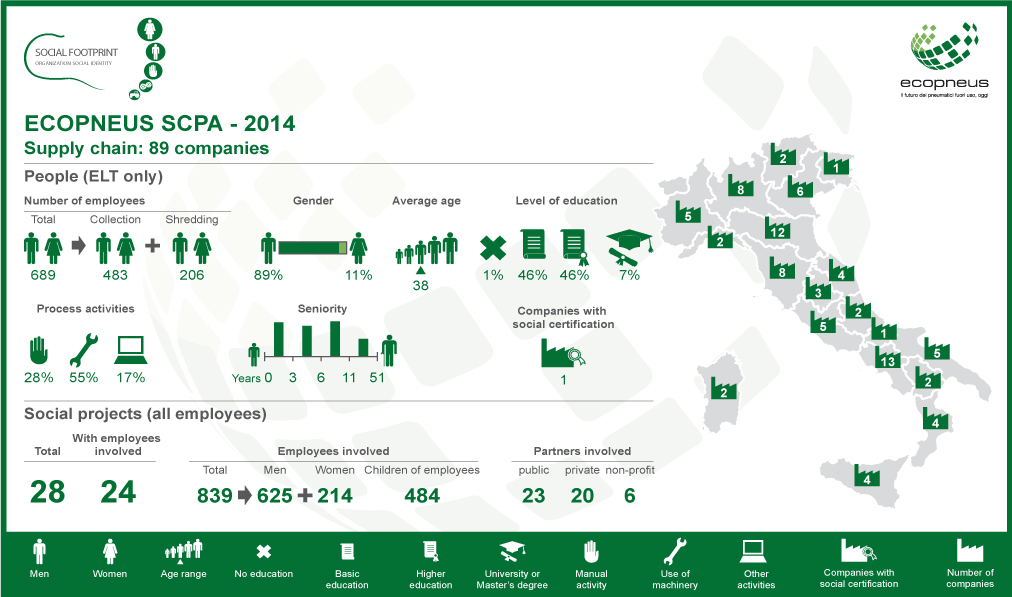 In total the companies involved by Ecopneus in the management of ELT give work to 4,526 employees. Of these, 689 full-time equivalents are engaged in the various activities related to the recovery of ELT: the size of a large Italian company.  At a national level, the average age of the employees is 38 years old with a breakdown by gender that shows a dominance of men (89%) with respect to women: a figure that is not surprising given the specificity of the activities performed, which are typically dominated by male labour (82% of the employees perform manual or mechanized management activities of the ELT collected).  Over half of the workers have an average seniority between 3 and 10 years, as compared to 29% who have been in service for less than 2 years and 16% with over 11 years of work experience.  53% of the total have a higher education or university-type degree.

For 22% of the companies in the supply chain, the management of ELT is a core business activity.  Of these, over half are shredding companies, which are also organized for the production of granules and powder for rubber recycling.  Primarily distributed in the centre-south, they have an average size of 11 units of staff: a statistic that, while highlighting the narrow room for manoeuvring to achieve a sustainable equilibrium of the system by exploiting possible productive economies of scale, confirms the suitability of the Italian productive fabric to the needs for flexibility of green economy activities.  However, the value of the social identity of the Ecopneus system – as it emerges from the Social Footprint – is also tied to the strategies implemented by the companies to create wellness for their employees and the community.  Among the various projects promoted by the companies of the supply chain – which over time have directly involved over 1,300 people between employees and children, as well as an indefinable but certainly important number of other stakeholders – we find initiatives that deserve to be valorised and accounted for as a further contribution to the system’s sustainability.  For example: support in the fight against dropping out of school in disadvantaged areas, the promotion of environmental protection through awareness campaigns for the recycling of waste or for the diffusion of alternative energies, sponsoring sporting and recreational events and activities, voluntary donations to local schools or hospitals, the promotion of local cultures and local food production, and financial support to international development cooperation projects.