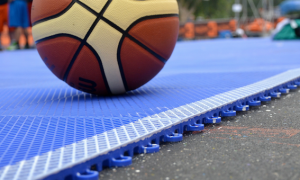 The Finals of the 2018 33BK Streetball Tour will be held in San Benedetto del Tronto on 3rd-5thAugust. It is a 3×3 basketball tournament that crossed Italy from the North to the South during the months of June and July. The tournament has now reached the beautiful city of the Marche Region for its final event. 200 male and female athletes divided into six different categories, from senior to under 14, will compete in the centre of San Benedetto. Giacomo Gek Galanda stated: “it will be a sports weekend, but also a great party for all participants, both players and spectators”. Galanda is a basketball legend and has been the Captain of the Italian National Basketball Team and a testimonial of the BGT Sports Company. Together with Ronzone Pallacanestro ASC, BGT Sports Company is organising the event. “These two associations have given life to an ambitious permanent and international project of quality basketball on Italy’s playgrounds and in gyms for years. Sport, music, and entertainment will alternate on the playgrounds, on the beach, during the evening parties, and inside the sponsors’ village, which has been set up in Viale Buozzi. Everybody will, thus, have the opportunity to interact with the partners of our tour. Sport lives of entertainment and vice-versa”, Galanda added.

The matches of the final phase of the tournament will take place during Saturday (for thw whole day, from 9:00 to 19:00 hours) and Sunday (from 10:00 to 21:00) on the premises of the “G. Maggioni” Tennis Club. On this occasion, a basketball court will be realised in this tennis club, also thanks to the collaboration with Ecopneus. Ecopneus is the non-profit company responsible for the management of End-of-Life tyres in Italy. It is also strongly committed in the promotion of the use of recycled rubber in high-quality sustainable sports surfaces. The Tyrefield basketball court installed in San Benedetto del Tronto is 450 sq/m. It has been made using 2,000 kg or rubber recycled from End-of-Life Tyres. On the rubber layer a specific removable surface has been installed. This surface complies with FIBA’s requisites. FIBA is the International Basketball Federation.

Charity will not go missing also during this weekend dedicated to basketball. Today’s and Yesterday’s basketball stars will compete in the charity tournament “Basketball for Marche” on Saturday 4thAugust at 21:00. European Champions of Paris 1999, Olympic medallists from Athens 2004, and today’s champions will get out there and will be available for photos and autographs. They will be raising funds for the people hit by the earthquake in the Marche Region. The entrance to the show is free and the whole amount raised from the donations during the three evenings will be donated to the association “Donne in Arquata” (Women in Arquata). This association was born out of some mothers’ dream to go back and live with their families in their homeland, devastated by the 2016 seismic events.

Among the events surrounding the tournament, there will be the long-awaited free style basketball exhibition of the “Da Move” on Friday at 20:30. They are a leading group at European level of this incredible and spectacular discipline. There will also be the “Stance Skill Challenge”. This is a contest of skills open to whoever would like to put themselves to the test with speed, precision and basketball skills.  The “Turkish Airlines 3pt Contest”, instead, will be held on Saturday evening within the event “Basketball for Marche”. This contest is open to everybody and allows to try and throw from the long distance next to the champions present to the event.

TYREFIELD: the future of basketball has a new ground

In the Tyrefield sports surfaces for basketball, recycled rubber is used to make a performing layer under the playing surface. The used mixes are designed to achieve both an adequate level of shock absorption and the optimisation of the return of elastic energy. This gives a perfect answer to the athlete’s biomechanics needs. Moreover, it reduces muscular fatigue, softens micro traumas and improves the sports performance in general. The rubber layer is made by placing together some prefabricated mats in recycled rubber. On this layer a special coloured acrylic finishing is then applied. The line markings are then applied onto this same finishing. Another solution for the creation of the under layer is the one of “melting on the spot” a mix of rubber granules and polyurethane resins, which create a uniform surface. On this surface the superficial finishing is then placed.

Even the basketball players that are so lucky as to play on a traditional parquet court may find a multi-material prefabricated mat in recycled rubber under the wooden layer of the court. This mat gives elasticity to the wooden surface and noticeably improves the acoustic comfort of the sports installation, thanks to the sound-absorbing and anti-vibration properties of rubber.