And football is back again in Scampia: a victory for legality.” Avvenire”’s report 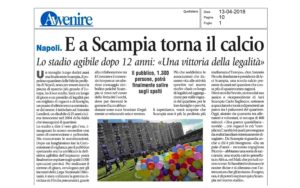 It has taken twelve years but, finally, Scampia has its new Stadium. The populated “Vele” district in the periphery of Naples was famous in the past for being the largest drug dealing area in Europe. The new stadium will be a place where to play and a source of legality for about one thousand children and families, a point of reference starting from its name: it was dedicated to Antonio Landieri, a 25-year-old disabled man who became an innocent victim of a feud that covered the district with blood in 2004.

To be honest, the stadium already existed. It was inaugurated last November among emotion and balloons.However, the authorisations were missing. After a very long process, the Supervisory Commission for Public Entertainment has now certified the definitive conformity to standards of the building. Now the stadium will finally be able to host the planned 1,300 spectators. The pitch is homologated for the National Amateur League games. To make it, the rubber recycled from 10,000 tyres was used, thanks to the collaboration between the Council of Naples and the consortium Ecopneus: this is a further symbolic message, because Scampia is located in the heart of the “terra dei fuochi” (land of fires), where the abandoned automobile tyres were illegally burnt for years, thus poisoning both air and soil.

The associations that will give life to the new sports activities in the new stadium are very satisfied: Antonio Piccolo, founder and president of Arci Scampia, a football school that has had more than 400 pupils in Scampia for several years, stated: “It will be a place of legality and aggregation for a thousand kids of the area, for their families and for those (and they are welcome) who would like to find out that Scampia is not Europe’s worst periphery anymore.”

Ten years ago Mr Piccolo got hold of a park among big blocks of flats pushing out if it drugs dealers and drug addicts with the help of his friend and vice-president of Arci Scampia, Carlo Sagliocco. Today he looks after 400 minors with the help of coaches and volunteers. He smiles and says: “It’s a daily war with kids of a “complicated” age, many of whom come from extremely difficult families”. From Scampia, one looks also at those who are in greater need. Piccolo proudly tells us: “We have had a sort of branch in Mali, Africa, for a couple of years. This branch bears our name and the children wear our uniforms and train with the equipment we send them. Our dream is now to be able to host them here in the new stadium in Scampia”.