Preta’s playground in Amatrice is born again: an area dedicated to the children hit by the earthquake

In one of the areas mostly hit by the earthquake a new playground is born: Ecopneus has contributed with the creation of the playground surface in recycled rubber 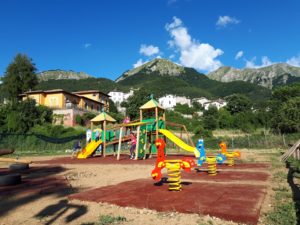 Preta’s playground in Amatrice is born again: an area thought for children and dedicated to them has been built in one of the areas in central Italy that were most affected by the 2016 earthquake. The playground was inaugurated on Sunday 4th August. It was created thanks to Rome’s Vagabondi in moto association. Ecopneus has contributed by offering the surface in recycled rubber for this playground. Recycled rubber is an excellent material for the creation of playgrounds and anti-shock surfaces for children’s playgrounds, thanks to the physical characteristics of the material, such as: elasticity and its capacity of resisting to sudden shocks without breaking, as well as its resistance to weather conditions. All this guarantees its long durability.

Giovanni Corbetta, General Manager of Ecopneus, said: “The surfaces donated by Ecopneus to Preta’s playground are a small but concrete sign that we wanted to leave to children to try and bring some joy and a smile in the life of those villages that have been badly hit by the tragedy of the earthquake. I would like to thank the association Vagabondi in moto for the great idea and the beautiful gesture of solidarity”.