Recycled rubber football pitches for the n 1 of football 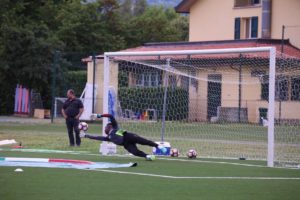 Sport and environment meet on the state-of-the-art synthetic turf football pitch made with recycled rubber from End-of-Life tyres of the Sports centre“Bernardini” of the city of Rome.

A technology that complies with UEFA’s, FIFA’s andthe Italian. National Amateur League’s maximum standards (the latter oversees the creation of all football pitches in Italy). It allows technical performances analogous to the best natural turf pitches, but with some management and financial advantages due to a reduction in costs for turf care, phytosanitary treatments and water consumption.

The maximum level performances of this pitch in recycled rubber have led some of the best goalkeepers’ coaches in Europe to choose it to host the training course “Goalkeeper’s training: from basic activities to high specialisation” on Saturday 9thJune. They are: Claudio Filippi, who is Juventus FC main team goalkeepers’ coach and also the responsible for the Goalkeepers’ Area of the same team, and Marco Garofalo, goalkeepers’ coach of the youth sector of SS Lazio.

The course was organised by ilnumero1.it, a blog specialised on the world of football goalkeepers, by Ecopneus, the main body in charge of ELT management in Italy, and by UISP-Unione Italiana Sport Per tutti(Italian Union Sport for everybody) to highlight how sport may and must also have a social role, carrying positive messages such as sustainability and the attention to the issue of recycling, especially towards the young generations.

Claudio Filippi stated that: “the course merges innovation in goalkeepers’ training methodologies with the technological innovation of a state-of-the-art synthetic turf with recycled rubber infill”. He carried on by saying that: “Pitches of this quality are now used also in the sports centres of important football clubs, among which there are also Italian premier league teams such as Bologna FC, Atalanta FC and Juventus FC, given that the performances during the training sessions are very similar to the ones you can experience on natural turf”.

The boys and the coaches that will attend the course will have a classroom lecture and then a training session on the pitch together with the coaches Marco Garofalo, Francesco Cioffarelli and Vincenzo Saccoccio of SS Lazio, under Filippi’s supervision. The pitch will be divided into 3 parts, with a coach of reference for each one of them. Every part will offer training exercises different from the other two. Every 30 minutes the young goalkeepers will rotate in order to be able to carry out all the planned exercises.

Blocks, kicks, punts, catches, dives are the technical gestures of the goalkeeper’s role. However, modern football has led to an evolution of goalkeepers’ technique and role, as they are more and more expected to take part to the team’s attack phase. For this reason, it is necessary for goalkeepers to train constantly since they are young: not only technical training, but also a preparation that can simulate the real game dynamics as much as possible.

Being able to do so on a state-of-the-art pitch in recycled rubber is an added value for certain boys, for the world of sports and for the environment.