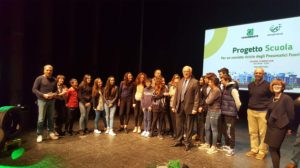 A state-of-the-art sports surface in rubber recycled from ELTs for three Sardinian schools that won the contest “For a correct recycling of End-of-Life tyres”, the training project for schools promoted by Legambiente andEcopneus – the latter is a non-profit company among the main companies responsible for End-of-Life Tyre management in Italy. This context has reached over 5,000 students of Sardinia’s Junior High Schools with activities and lessons linked to the correct recovery of End-of-Life Tyres.

On its 7th edition, the context has involved the Sardinian students in making a video with a message linked to the good practices for the correct recovery of ELTs,the End-of-Life Tyres. A jury of experts, composed by representatives of Legambiente, Ecopneus, The Ministry of Instruction and the Ministry of Environment evaluated all the works and prepared the ranking. This was announced today during an event for the students on environment and legality and the theatre of the Saline of the city of Cagliari.

The Scuola Media Pascoli-Nivola of Assemini (CA)came first, followed by the Scuola Media of Villanova Strisaili (OG), whilst the third classified was the Liceo Scientifico e Linguistico Statale Enrico Fermi of Nuoro.  Thanks to their commitment, the students were able to donate new, extremely performing and sustainable playgrounds to their schools. The playgrounds are made with over 80,000 kg of recycled rubber from End-of-Life Tyres.

Giovanni Corbetta, General Manager of Ecopneus, stated that:“Today’s event is the conclusion of a training project the students started at the beginning of the school year, and the awards are the concrete evidence how ELTs are a source of precious materials for many useful applications”. The training on topics of legality and environmental protection is central for the students’ growth, but also for contrasting environmental crime. Also the 15thstop of the ELT Academy Ecopneuswill be held in Cagliari tomorrow. This is a technical training workshop for the Police forces and control bodies on the legislative and judiciary implications of ELT management, to give operative tools to all those people who are concretely working on the territory every day of the year”.

Indeed, this training is a fundamental tool to favour a valid collaboration between public and private and to assure a correct management of End-of-Life Tyres, which may have wider positive effects on all society. The rubber obtained from the recycling of end-of-life tyres is a high quality and precious material that is widely used all over the world to make sports surfaces, football pitches, sound insulation panels, urban furnishing, silent, safe and long-lasting asphalts or as energy for families and companies.