NBA’s champion, Danilo Gallinari, on the basketball court in Milan for “We playground together”: the playground will be realised in rubber recycled from ELTs 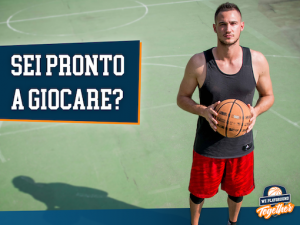 Danilo Gallinari is an Italian basketball player among the most famous in the world. In collaboration with the Sports Department of the City of Milan, he has decided to turn into reality an idea he has had for a long time. Indeed, he has personally been involved in the project WE PLAYGROUND TOGETHER, which has led to the requalification of a basketball court in Milan.

The aim of the project is to put into place some valid actions to get to a full requalification of Milan’s neighbourhoods. The concept of the project is to turn street basketball into a practicable, entertaining sport that is at everybody’s reach. To achieve this goal, the plan is to requalify the courts of the neighbourhoods, some of which are abandoned, so that they can go back to host and entertain thousands of basketball fans. As it happens in many European and Overseas realities, indeed, sport, and in particular basketball, allows the meeting and the confrontation among people with different identities and stories. The playgrounds are a space where, in the name of sport, one can compare him/herself and can play with everybody, breaking down those barriers which, still too often, separate people of different ethnic backgrounds and provenance.

Being able to do it on a sports surface attentive to the environment, made with the rubber recycled from End-of-Life Tyres, is certainly added value for the whole project. Thanks to the rubber recycled from End-of-Life Tyres (ELTs), it is possible to create excellent Tyrefield basketball courts. These high-quality courts offer a safe playing experience. Elasticity, shock absorption, excellent return of the elastic energy, and resistance to all weather conditions make these courts the ideal solution for outdoors courts and for 3×3 basketball.

The 3×3 discipline was born towards the end of the 1980s in the streets of the USA. It has been under FIBA’s observation for some years now. FIBA is the International Basketball Federation. The 3×3 basketball will debut at the next Olympic Games that will be held in Tokyo in 2020. The 3×3 Basketball is growing in popularity in Italy thanks also to the triumph of the Italian Female National Team at the latest edition of the world championships in Manila (Philippines) in June 2018.

Ecopneus is strongly committed to the promotion of the applications of recycled rubber. An event of such level, with a world-star such as Danilo Gallinari, cannot but contribute to the consolidation and the development of basketball playgrounds in rubber recycled from ELTs.

As he has often stated, Danilo Gallinari is regular at the Milanese playgrounds, despite he is a forwarder for the franchise of the NBA Los Angeles Clippers and the Italian National Team. There are many courts, especially in the periphery of the city. However, most of them are in such bad condition that cannot be used. The NBA star stated: “Integration through sport is a concept that is very dear to me. Through basketball it is possible to overcome many barriers and positively fight for a common objective”.

By the means of a strong action of requalification, WE PLAY-GROUND TOGETHER plans to encourage initiatives aimed at improving the largest number possible of basketball courts in the Milanese neighbourhoods. This shall be done through the purchase of new backboards and nets and the upgrading and requalification of the courts, the renovation of benches and the adjacent structures.

The neighbourhood court can and must go back to be an important reality in young people’s lives. It must represent a real aggregation point, the place where the desire of playing, having fun and getting to know new people becomes one with the passion for sport.

WE PLAYGROUND TOGETHER will start from the playground of the “Vittorio Formentano” Park, which is known as “Parco Marinai d’Italia” (Italy’s Sailors’ Park) of Milan.  Its restyling includes the whole remaking of the sports surface, the hoop and the benches. The end of the works is planned for September 2018.

All renovation activities will carry on in the course of the years with the requalification of other two structures: one planned for 2019 and another one for 2020. The project will also take care of the maintenance of the good conditions of the court.

The wish of Ecopneus is that every city and every neighbourhood will have their basketball court – in recycled rubber obviously!

WE PLAYGROUND TOGETHER has been made possible thanks to the work of Michele Ponti assisted by White Cobra, Prodea Group, and Adidas, with the support of Sisal, D1 Milano, Mapei and N26.