The roads of the future are environmentally friendly: asphalts made with rubber recycled from End-of-Life Tyres have reached Alcamo (TP)

About 3.000 sq. m. of asphalt have been made with an innovative bitumen enriched with rubber recycled from End-of-Life Tyres that allows to reduce the noise of passing vehicles and to have a road that can last for up to two times longer than traditional ones.

In the last decade, the equivalent in weight to over 19 million End-of-Life Tyres has been collected and recycled by Ecopneus, the non-profit consortium that is the main operator in the management of ELTs in Italy (about 60% of the total) now on its 10th year of activity

A road where no potholes are created; a road that does not degrade because of weather conditions and that can reduce the noise of the passing vehicles. It is not a science-fiction film, but a technology that is getting more and more common in Italy after having been tested all over the world for over 50 years– from Arizona’s deserts to Sweden’s ice.

These are the asphalts modified with recycled rubber powder. As of today, already 600 km of Italian roads have been resurfaced with this technology. Today, a new stretch of road is to be added to the count in Alcamo, Trapani. By adding rubber powder derived from the recycling of End-of-Life Tyres to the bitumen used for asphalts, it is, indeed, possible to obtain a road surface with better mechanical performances compared to traditional bitumen. Moreover, it can also reduce the noise generated by the passing vehicles by up to 5 dB.

The General Manager of Ecopneus, Federico Dossena, commented: “The intervention carried out in Alcamo is concrete evidence of the importance of the correct recovery and recycling of End-of-Life Tyres. Ecopneus is strongly committed to the spreading of this valid technology, which is already present on over 600 km of roads all over Italy. If one adds a longer life span duration (which, in its turn, implies lower maintenance costs) to the advantages generated by the acoustic benefits of rubberized asphalt, it is evident how the surfaces made with modified asphalts are a valid and strategic choice for the national road network – both urban and extra-urban”. 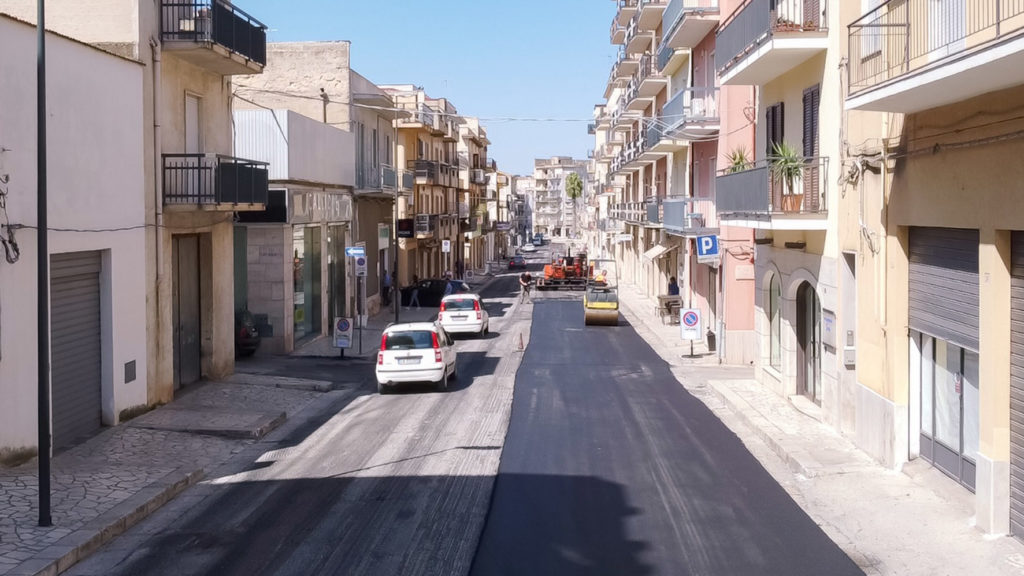 A special bituminous conglomerate made with the addition of rubber powder from ELTs and specifically engineered to be more performing was chosen by Alcamo, a town in the Province of Trapani, for the resurfacing of one of its main streets: a stretch of road in Corso dei Mille for an overall surface of about 3,000 sq. m.

A new impulse to a technology that is growing in popularity in Italy, also thanks to the support of Ecopneus. In the past 10 years, Ecopneus collected over 170 thousand tonnes of End-of-Life Tyres in Sicily – the equivalent to the weight of over 19 million automobile tyres. It carried out an average of about 9,400 collection missions at tyre dealers, service stations, and workshops of Region Sicily every year. An amount that, used in the road sector, could lead to the creation of well over 4,000 km of sustainable roads surfaced with asphalts made with recycled rubber.

At national level, Ecopneus has managed 2,220,090 tonnes of End-of-Life Tyres (the weight of 20 super aircraft carriers), 130 thousand tonnes above its legal target (+6% as yearly average) since 2011. Moreover, Ecopneus has carried out over 700 thousand collection missions at about 25 thousand tyre dealers all over the Italian territory. Ecopneus has also been particularly committed to the emptying of historical stocks and to the extraordinary collection of ELTs abandoned on the territories of the so-called Terra dei Fuochi (Land of Fires), for a total of 87 thousand tonnes of collected ELTs.